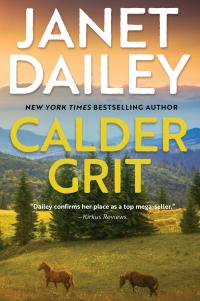 Cat is a Calder through and through: proud, headstrong, intelligent, and extremely beautiful. When her fiancé is accidentally killed, she retreats to the family homestead to mourn, vowing never to give her heart to another man. But one reckless night with a handsome, gray-eyed stranger changes her life forever--and gives her a son with striking gray eyes.

Cat decides to raise the child on her own, as a Calder, and live with her family on the Triple C Ranch. Even though the town has watched Cat grow from a girl to a young woman, they treat her as an outcast when they learn she is an unwed mother. Despite her family's wealth and power--or because of it--Cat is gossiped about meanly, and it takes all her pride to hold her head up and ignore what she knows is being said behind her back.

But Cat cannot ignore the new sheriff, Logan Echohawk. It isn't his rugged good looks that cause her heart to skip a beat when he first arrives in town--it's his striking gray eyes. It seems impossible, but the man she thought she would never see again is now a part of her life--whether she wants him to be or not. And will he notice her son's eyes and figure out what she vowed never to tell him?

Cat finds herself torn between her promise to her first love and powerful, unexpected feelings for her child's father. With her family standing firmly behind her, and her son's future in her hands, Cat must decide: Will she take a chance on a new, true love?